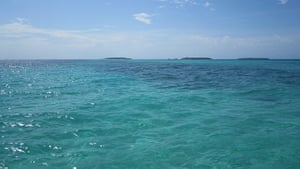 Sea creatures and ocean vistas: the watery world under threat - in pictures

Recreational fish landings into Key West, Florida, demonstrate the changing fortunes of life in the sea.

This picture of a catch of goliath groupers, whose swollen bellies show they were full of eggs, shows landings typical of the 1950s... 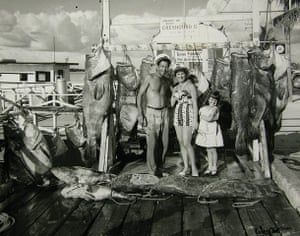 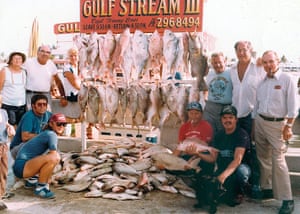 ... and this picture, taken in 2007, shows landings typical of the first decade of the 21st century. The fish and catches have become smaller over time; most of today's anglers are unaware of the extraordinary decline of Florida's reef fish revealed by these images. 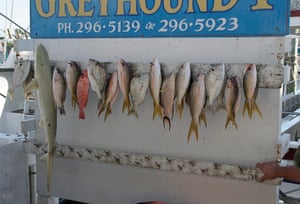 The Fishmarket by the Dutch artist Frans Snyders (1579-1657). The composition is fanciful, but the animals and their sizes were representative of those available to customers of the day. A huge wolffish gapes from the centre of the painting and lies across enormous sturgeon and halibut. To the left are large cod, ling and salmon steaks while turbot hang from hooks at the back. Other creatures that might surprise present-day shoppers include lamprey, porpoise, seals, common skate (now extremely rare in spite of the name) and pike.

Coral reefs are the richest of all marine habitats, but now also the most endangered. Across the world they have been devastated by overfishing, disease outbreaks and warming seas; increasing ocean acidity from dissolving carbon dioxide will compound their woes in the coming century. This photograph from Palawan in the Philippines captures a fleeting moment in the process of bleaching - caused when temperature exceed their local maximums -when the colours of the corals brighten before they disappear. Three months later, all these corals were dead.

The sea seems endlessly able to cope with our detritus, but we're producing junk at such a rate that we're managing to befoul great regions. Laysan albatross live in the North Pacific and fly thousands of kilometres over the open sea in search of food for their young, but cannot distinguish floating plastic trash from food. This chick from Kure Atoll in the north-west Hawaiian Islands starved to death on a junk food diet.

Although protecting the giants of the sea requires decades of dedicated work, there are encouraging success stories. In Brazil, the number of Olive Ridley turtle nests has increased by 15 times in northern San Paulo since conservation efforts were launched in 1980 by a national environmental organisation, Projeto Tamar.

Although problems facing the sea seem overwhelming, life is resilient and can bounce back given a chance. Lamlash Bay on the Isle of Arran in Scotland was protected from fishing in 2008 after a decade long fight by the local community against prejudice, indifference and obstruction by government officials and fishing industry. Surveys show that life in the bay is already on the rebound. To shift course from degradation and decline to fertility and increase, research suggests we should cover 30% of the oceans with reserves like this.